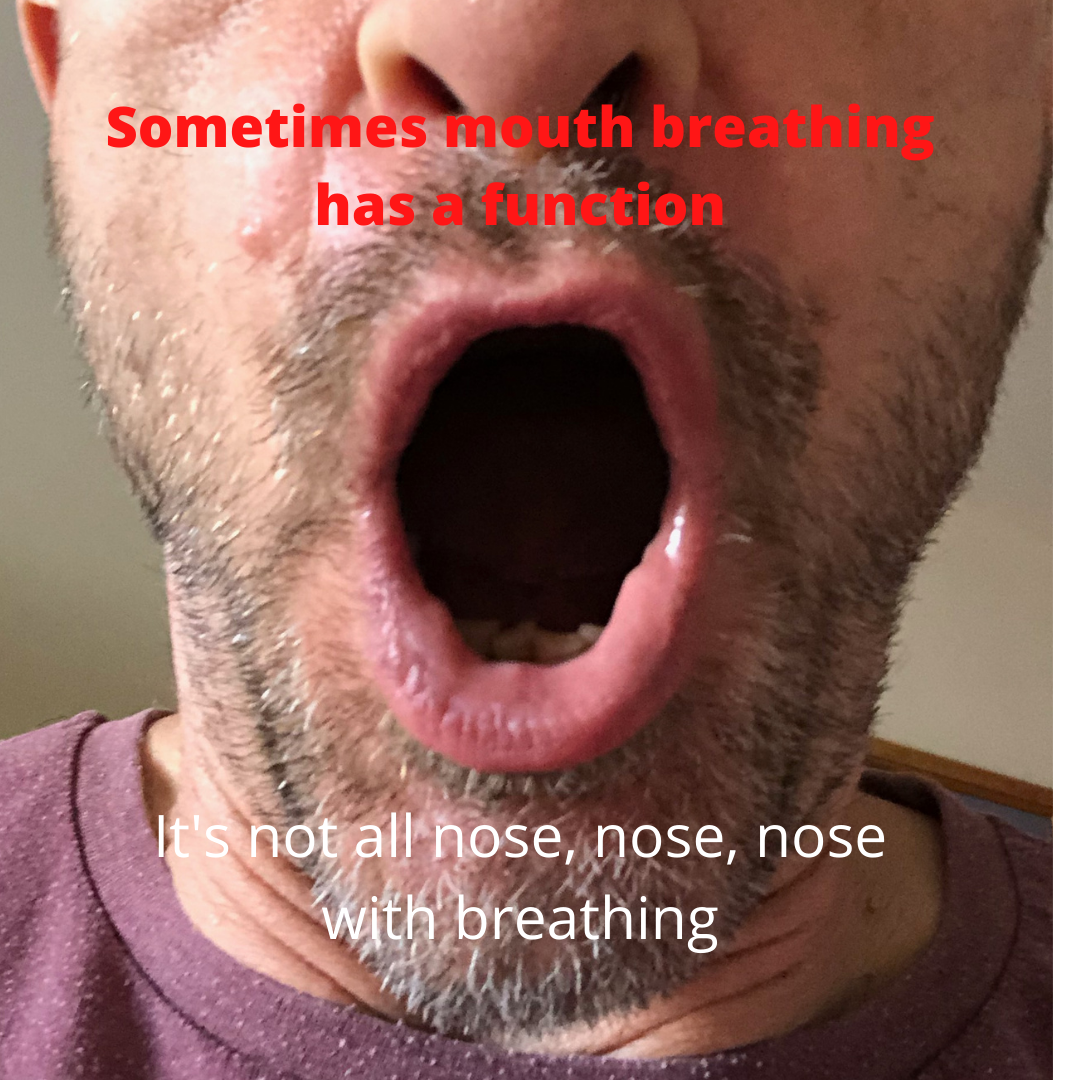 I now publish regular breathing drills and give the occassional zoom seminar . However, breathing has been one of those ongoing issues where people have been able to misrepresent, twist and ignore the science.

This goes for exercise professionals, miracle healers and straight up loonies.

Certainly in my massage therapy, subsequent CPD and first aid training, very people had suggested that breathing drills should be done by otherwise healthy individuals.

2) breathing through the nose improves oxygenation through the release of nitric oxide and increased serum carbon dioxide, thus prompting, via the bohr effect, oxygen release to the working muscles.

However, many athletes report the sensation of air hunger if they nose breath, and therefore debate or reject the idea that high intensity exercise needs to nose breath.

They found that after, quite a lot of training, nasal breathing didn’t interfere with A VO2 max test, but produced a better physiological economy and a significantly lower mean ventilatory equivalent for oxygen and CO2. Its worth considering the participants trained nasally for 6 months.

It’s also worthwhile noting they really struggled for volunteers. The test also used nasal strips, that increase the size of the nasal passage. The actual conclusion is quite modest, that recreational runners can use nasal breathing without sacrificing performance following an extended period of time adapting to the practice.

The speculation is that nasal breathing increases tolerance to CO2 .

This is where much of my issues with the rebounding breathing cult comes from ( its been bouncing around the hippy fringes for years). So we have some runners, spending 6 months learning how to nasal breath, and the only really “wow” conclusion is that after 6 months worth of nasal training you can retain your previous levels of training.

Am I alone in thinking that isn’t so great? But to be clear, if you are at rest and over breathing through your mouth and there is nothing wrong with you other than the panicked breathing pattern, you need to slow that stuff down.

Nasal strips. So this test used nasal strips. So you have to include in your thinking/training, if your nose is up to it, or are you nothing but an inbred pug who needs some mouth breathing? I do come across people with noses that are pretty much blocked. The “mewing” cult (that I’ll discuss elsewhere) is based on building your face and airway passages up as too many people have weak face/mouth muscles.

You should nose breath as it humdifes the air. Maybe humdifying air isn’t the best thing for everyone

The paper “Broncho-constriction Triggered by Breathing Hot Humid Air in Patients with Asthma” (Hayes et al.) pretty much “discovered” what the title suggested ( humid air can do bad things to some people). That said, humid air does not trigger this effect in healthy people.

It’s worth spending sometime away from internet video lectures and checking out some of the solid therapy books on the subject. Look up Action Projection in “Recognizing and treating breathing disorders” by Chaitow, Bradly and Gilbert. The breathing cult probably needs to acknowledge that chest breathing has a function, albeit limited to specific circumstances.

Imagine it’s just before a fight or a big Deadlift. It could be argued to be a great idea to take some big mouth breaths, so they say, in advance of action as it confers a physiological advantage; it increases oxygen, lowers CO2 which prepares to balance the CO2 surge and acidity produced by exercise.

It’s worthwhile considering that pre exercise shifts in breathing are common, including breath holding to enhance stability, listening and concealment tasks (If a mass murderer is in your bedroom and you are under the bed hiding, maybe you want to be very quiet).

In an attack is expected , tensing the abdomen can be protective and most confrontational situations require a stabilised torso. If you need to armour plate your abs, breathing can take place through the chest and indeed thoracic breathing increases cardiac output which is useful during an attack. The advantages of thoracic breathing is that it also acts as a back up system to enlarge your breathing capacity.

None of this temporary mouth based breathing is a problem if the threat materialises: you launch your punch, you run for your life. This mouth breathing has occurred because you are thinking and preparing for the future. The obvious problem being when the threat is non physical or remote. Using an emergency mouth breathing based preparation system as your default breath method can lead to establishing quite serious breathing disorders.

Make sure you hunt down my breathing videos, articles and talks