If you want “functional Fitness” should you be “Olympic Weightlifting” 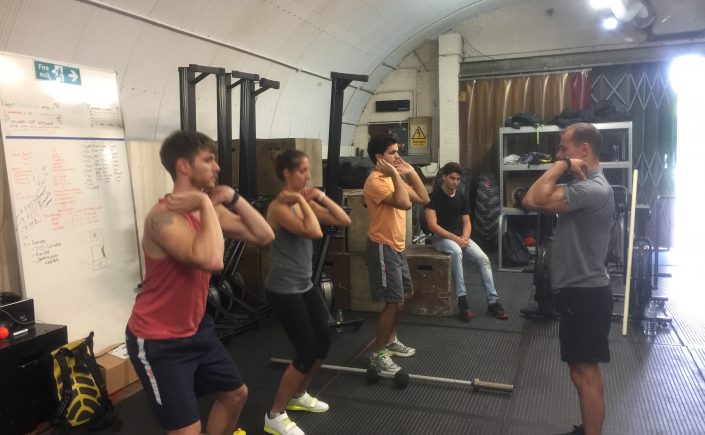 Depending upon your view, I have either a very narrow or very broad definition of functional fitness. I simply look at those people I would want to take with me into the unknown. Recent crises have seen buildings collapse, crowds riot, aid in need of unloading and rival villages or postcode gangs in need of killing or a good shanking.

I know I annoy a lot of strength trainees who expect me to marvel at their deadlift, and wee little runners who want me to stand drop-jawed at the fact their genetic profile means they can prance around like a gazelle all week. My problem is this specialism produces useless gits. There, I’ve said it. Are you are kettlebell specialist? Yes, no, sorry – you’re a git. Same with 400m runners, same with deadlifters: Introverted, useless gits.

In a normal world, nature does not throw you component challenges of strength or distance or flexibility – it just drops you in holes, floods your home, collapses buildings on your family. Are you a fantastic deadlifter, tough, because you now have to run 10k to get some water? A yoga specialist? Damn, you now have to shift a ton of rubble to rescue your family. A runner? Now you have to pull yourself out of a hole. Bugger!

So that’s my view. Agree or not.

But what are the Olympic lifts?

According to me, in a less witty writing style:

“The Olympic lifts are a sole-participant, self-paced skill performed in a static environmental context. The move is initiated by the performer, which according to Gentile (Schmidt & Weisberg, 2000) makes this a closed motor skill. It is an object manipulation action function involving the change of position of a barbell (Magill 2007), requiring correct management and the adjustment of body position to counteract the in-balance created by the object and conforms to skill definitions suggested by both Knapp (cited in Guthrie 1953) and Magill (2007): a learned ability, maximum certainty, minimum of time and energy with predetermined results and, according to Schmidt & Weisberg (2000) produced as a function of practice.

The snatch for example is a ground based multi-joint weightlifting exercise. The athlete exerts large multiple-muscle group force whilst standing on his own feet, thus developing balance and coordination. The speed develops the nervous system (Garhammer, 1985). The move requires a triple extension at the ankle, knee and hip – a jumping athletic movement, which demands the athlete recruits muscles in a synchronized pattern. The move develops explosive power: and requires a high degree of kinesthesis or proprioception (Magill, 2007) The larger muscles are mainly used, making this a gross motor skill, requiring both gross motor and psychomotor ability (Magill, 2007)” (Stemler, 2009)

According to Arthur Drechsler, author of The Weightlifting Encyclopedia often cited as “the single most important book ever written on Olympic weightlifting” (by people who cannot possibly have the read this boring book),

Chiu and Schilling (2005) observe that Olympic weightlifting is associated with improvements in motor control, noticeably improved activation of muscle groups and motor units, and activation of more fast-twitch fibers. Hence the skills are also taught to many athletes as part of their strength, conditioning and power programmes, and are not pursed as a sport in their own right.

How do you learn this stuff.

Without a doubt, you must learn the snatch with a bit of PVC pipe in a drill based seminar. A good 2 hours of marine-type drilling will get you the basics of the snatch.You can build on this in the years to come. I recommend this because it was the way I was taught. It’s the method we use on the i-course, and I have used it for 5 years of one-on-one and class training. It has received praise in scientific literature.

I think it’s very superior to throwing a 20kg bar at someone and telling them to get on with it. I see this approach too often in the few remaining “authentic” lifting clubs around – or certainly those that are competition-orientated who believe that your training should be as abusive and poor as the training they had, combined with the belief that breaking complex skills down is “spoon feeding”.

Me, I love being spoon fed.

Once you have the basics, start adding weight. It’s as simple as that.

So Olympic lifting is essential to be a functional athlete?

There are generations of strong, effective, functional people who have destroyed whole civilizations, and mutilated acres of this planet’s surface who never heard of the Olympic lifts, let alone screwed one up. (Incidently, missing a lift is the more fun part of lifting: hence the famous books, “When Lifting Goes Bad”,” Missed Lifts That Amost Killed Me”, “Missed Lifts That Almost Killed The Cat”, “Missed Lifts That Actually Got The Cat”,”Why Your Cat Doesn’t Want You to Olympic Lift”.)

So, no, it’s not essential.

In the same way it’s not essential to buy your girlfriend flowers.

If it’s so great how come its so underground?

For those of us who have lifted for a while, and see throwing a bar into the air then catching it as normal, we must remember that all this fun has all but been wiped out as a general fitness activity. Most gyms don’t have bars, certainly cannot be bothered to buy expensive bumper plates, and will go beserk if you drop a weight on the floor. Above all they don’t employ staff with enough skill to teach the lifts. Those that have the skill at your local leisure centre, quickly leave.

As a competitive activity, lifting appeals to a minority of a minority. As an all-day sporting event in anything below Olympic level, to watch or to take part in, it is viciously boring. I don’t intend to compete/watch again. If I do, I’m taking a spoon to scoop out my eyes with halfway through the day, just to break the boredom.

But to take an activity this effective and make it this unheard of, takes some doing. Until recently Olympic lifting has been seen as a dedicated sport (yawn, yawn, see above), controlled by a very well meaning, government handout-obsessed but incompetent group of old boys who have managed to make a boring sport difficult to access and learn. The years of mismanagement and introspective alienation of new trainees needs acknowledgement and praise. Their love and devotion to the sport is without question. If only that was enough.

But why did the Olympic lifts come crashing back to life.

Rapid, force-generating hip extension has always been at the heart of athletics ( jumping, sprinting etc), but this force has always been seen as a single explosion The few athletes who are encouraged to take up the Olympic lifts normally focus on low-repetition and high weight, in pursuit of Olympic weightlifting’s objectives of power and strength.

According to Greg Glassman, Crossfits founder, the value of the lifts outstrips their much-promoted development of strength and power. Those who struggle to learn the clean often suffer from a lack of sufficient speed, flexibility and ability irrespective of how much imagined strength they possess. Refinement of the move calls for exacting standards of coordination accuracy and balance which often outstrips the ability of most strength specialists

His observation that directly proportional to the load you can clean are the benefits, strength, power, accuracy, flexibility, speed, accuracy, agility and balance, is a standard proposition. However his second, unique, world-changing, visionary observation was that your cardiorespiratory endurance and stamina are directly proportional to the reps and loads you can clean. Crossfit, to my knowledge, was unique in the early days in requiring repeated hip extension under fatiguing conditions which, arguably, is more functionally relevant than the best you can lift. The ability to do one thing explosively, once, is very overrated (there is the potential for a smutty joke here that I am rising above).

Heretically, Greg also goes on to state that you don’t need to be able to do the lifts super-well to get super-benefits. This must have a been a stinging slap in the face for the old boys who had spent years of effort working out the most effective way to lift half a kilo more.

This is a complete exercise which incorporates a “super-useful” core to extremity motor recruitment pattern, along with learning how to generate and transmit large and sudden forces.

From another perspective, it builds bravery and stupidity, the two essentials for any elite functional athlete . The Olympic lifts involve throwing stuff from the floor to above your head (while standing). Visualise the issue – you have thrown something heavy into the air, and it’s now crashing down upon you…

You have two options,

Option 1 is sensible and demonstrates a mature ability to identify risk. Option 2 is dangerous, foolhardy, bound to end in tears – and – incidently, the right answer.