Is trauma undermining your health? 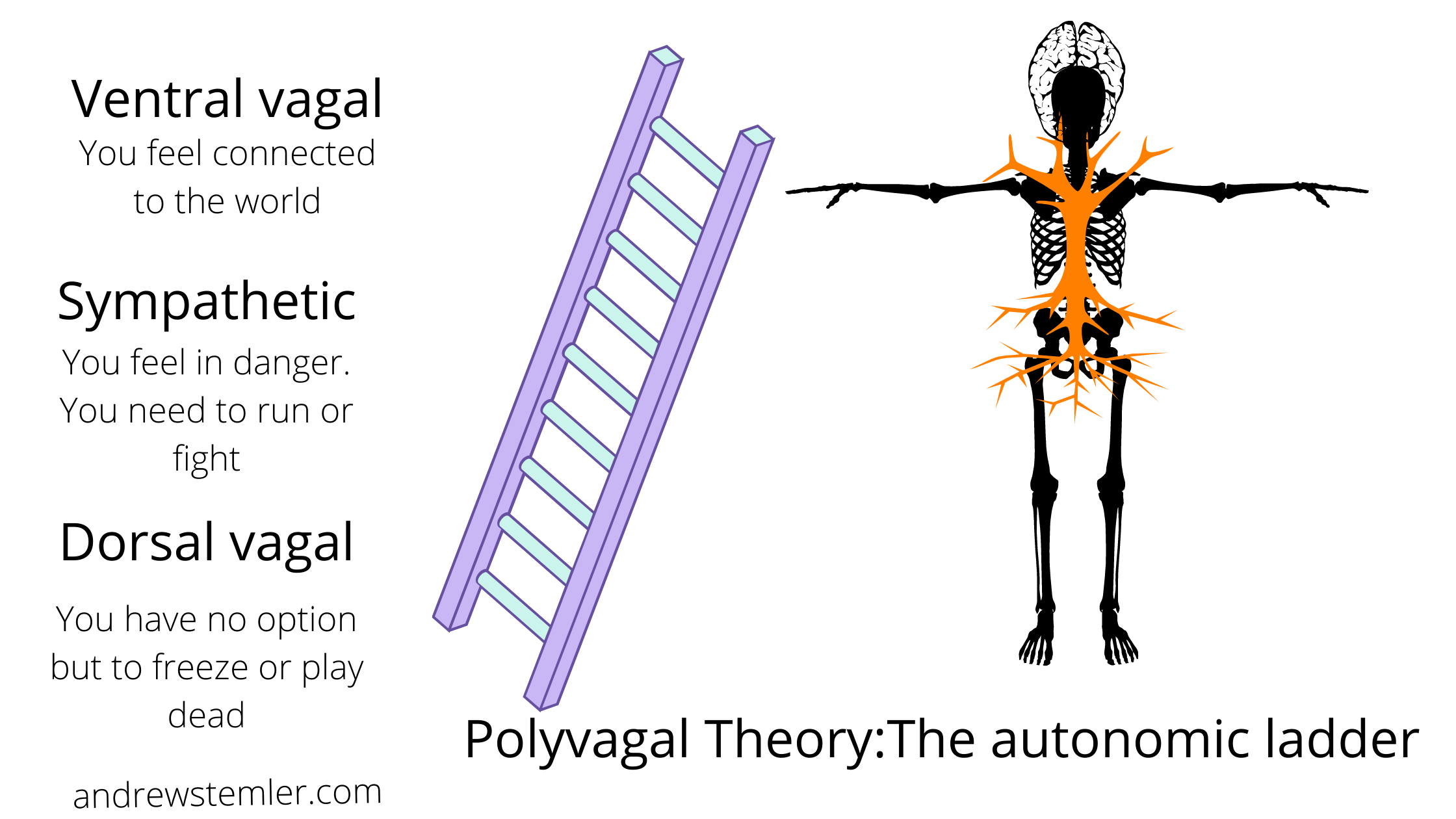 This is a post that contains some simple ideas to explain why so many people are probably suffering from some sort of trauma.

It’s also a basic attempt at introducing you to PolyVagal theory.

This is my first public go at accounting for why so many people know what they should be doing, but don’t do it, no matter how simple or easy the beginning task could be.

In basic polyvagal theory ( note, it’s a theory, not a gospel, or the law or indisputable) Porges identifies 3 groups of reactions to stress. Let make this easy. Let’s say you see a mugger coming to mug you.

Here are your choices in picture form

As you can probably see when you fear an attack, your number one option is to cry for help or get social support. Option number 2 is to fight or flight. Everyone has heard of this. The human body is often portrayed as fluctuating between “fight and flight Versus rest and digest”.

Its not that simple.

As a matter of evolution, your body has a primeval programmed immobilisation survival strategy. When other options are not available, the body freezes. Many predators do not eat animals that are already dead, so freezing can often be effective, and in some cases, the only viable strategy.

The failure to comprehend that your survival brain, sub consciously, pushes you into immobilisation as its last desperate survival strategy has all too frequently resulted in the criticism of victim behaviour.

“Why didn’t you fight back” is often thrown at sexual assault victims.

Trauma is that the core of PTSD. I suspect many people have a version of PTSD.

We all go through stressful stuff. Many of us have seen really awful things, and have survived with often no side effects. On the whole, the seriousness of what you experienced is not the sole determinator of whether your body processes the event as a trauma. It’s your reaction to it.

The simple fact is that how you recover or discharge stress after immobilisation, seems to be the key. In the 1950-1980 period, some awful experiments were carried out on chicks and rats. Basically, survival times are increased if an animal is stressed then allowed to recover, then exposed to a task. The literature has called this building resilience and/or building hope. An animal that was stressed but not allowed to recover failed the test first. It’s worth noting those with no stress experience failed quickly too.

In order of failure,

“Levine (1997) equates the lack of recovery from the freeze, or immobility response with retention of the stored and undissipated energy of the truncated fight/flight response. This sustained state of sympathetic arousal serves as the drive for the memory and arousal-based symptoms of trauma and PTSD. He attributes the tendency for traumatization in the human species to the inhibitory influence of selected neocortical centers that block the instinctual capability that other wild animal species possess, to “discharge” this retained energy”

I now turn to some studies of the Yom Kippur war (1973). Here longitudinal assessments of service people who were exposed to stressful war events have been possible

The study examined the functioning between battlefield functioning , battle related PSE and attributional style amoung 3 groups combat stress reaction (CSR) casualties, soldiers decorated for heroism and Controls ( neither broke down or got a medal)

In World Assumptions and combat-related stress disorders (Solomon et al) identified the value of a connection between a soldier and their unit with high morale and cohesiveness with a sense of belonging seen as critical. Those who suffered from CSR had a deep feeling they were alone both in combat and after it, they felt deserted in combat.

Those with CSR also got negative feedback: Btw if you thought it was cool to attack service people who fought in Vietnam, or Iraq, you probably compounded their trauma!

In combat exposure Wartime performance and long term adjustment among combatants (Dekel) observed that the mental health impact of stressors depends less on their objective severity than on the individual’s assessment of the severity of the threat posed by the stressor and of the resources at his or her disposal to cope with the stressor .

The common denominator seems to be that all the items point, in one way or another, to defective functioning on the part of other soldiers or the army command.

This defective functioning indicates to soldiers that they cannot rely on their buddies or superiors, the people on whom they are most dependent in combat, to guard their safety. The lasting uncertainty and distrust that such a realization evokes may explain the enduring impact.

So how does this help us.

These feelings of betrayal or lack of self-efficacy can switch on the freeze response. In nature, the average freeze response (imagine a mouse attacked by a cat) is followed by an escape/attack or a discharge. The mouse victim of your cat freezes until the cat loses interest, then runs for it. Some victims see that escape opportunity and run. Maybe a rescuer arrives and gives you support. This seems to result in a return to normal. In all cases, no trauma results as the stress has been discharged.

But change the scenario.

You are abused in your bedroom by a powerful attacker who says they will kill your family if you talk. You freeze during the assault, you stay frozen in your bed, unsupported through the night, and in the morning, you do not dare to ask for support.

In a scenario that I’m all too familiar with in my work as a city-based trainer and bodyworker, often a client presents with a “bad back”.

I’ve elbowed, needled, and pressed and twisted, and stretched everything (I mean, really). I have an enormous bad back tool kit, including P.N.F.’s M.E.T.s. I can manipulate your fascia, de-activate trigger points and pinpoint movement dysfunctions. I can often find nothing that would create or account for that amount of pain. Then, comes a common story. The client is very good at their job and has been so for a while. “The board” has now put a new manager above him, who is clearly an incompetent idiot.

Think of this in terms of the stress response. Your immediate boss is now your source of stress. You cannot appeal for help as the people who could have helped you are (for the time being) backing the idiot. You are frozen at your desk, immobilised while being criticised and wrongly directed by an idiot.

The consequences for human beings of not discharging the freeze or immobilisation state are quite nasty as this image summarises.

In fixing this, there is the top-down therapy approach where people try and make you relive the experience often with deep breathing. Often it doesn’t work with traumatised people. A more effective method I believe is coming from the work tested on some elements of the US army.

The initial approach, mirrors the evolutionary desire of every human being, which is simply to be safe.

If you can imagine your sophisticated brain is strapped to a neurotic/ angry/terrified dog who is charging around the garden because it thinks it can hear an intruder. No amount of thinking happy thoughts or deep breathing initiated by the brain is going to calm things down until your dog is calmer and feels safe,

Here is a beginning drill to help you get there. Super simple, easy to do in a couple of minutes. Is there more? Hell yes, but you have to start somewhere

Let me add one more thing you can do to start clawing your way out of trauma or stop stress becoming trauma.

Running and movement are part of recovering from a freeze or immobility state, but to be effective for freeze, it needs to be done after the freeze. Going for a jog in the morning may certainly help you feel good and it will build your cardio, but it won’t necessarily inoculate yourself against a traumatic event in the afternoon. If you have a bad event, getting out of the freeze state quickly by going for a walk, run, , or movement could really help you.

I’ll be giving more practical hints in the future, so do sign up for my emails or ask for 121 help (click here)

One thought on “Is trauma undermining your health?”