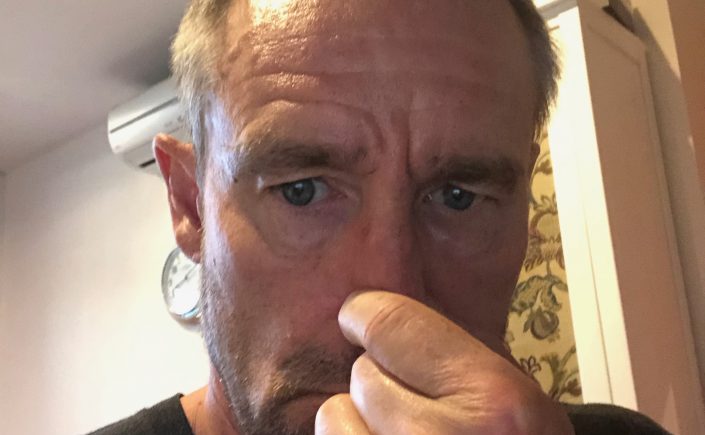 As I discuss here, and here, breathing has become a “thing”.

However some have problem breathing through their nose: here is the useful procedure from the Buteyko system

According to the argument  reduced  CO2 levels causes an increase in mucus secretion and constriction of the airways. and helps block it up.

The following, so it is claimed  is a simple exercise which could  unblock the nose (in as little as ﬁve minutes.)

The technique  increases   the   carbon dioxide levels in the blood, which  so its claimed, will open the nasal passages.

✦   Sit upright on a straight-backed  chair.

✦   Pinch your nose and hold your breath. Keep your mouth closed.

✦   Gently nod  your head  or sway your body until  you feel that you cannot hold your breath any longer. (Hold your nose until you feel a relatively strong need for air.)

✦   When  you need  to breathe  in, let go of your nose  and breathe  gently through  it, in and  out, with your mouth closed. Avoid taking a deep breath  when you breathe  in, and calm your breathing  as soon as possible by focusing on relaxation. Repeat to yourself ‘relax and breathe less’.

✦   Continue   to  do  this   exercise  until   you  can  breathe through  your nose  fully. If your nose  does not  become totally unblocked,  wait about  one  minute  and  perform this  exercise again.  Initially you may need  to do this  a number    of   times   before   your   nose   is  completely unblocked.

the basic aim is to improve your co2 tolerance.  even during a hevy cold you should breat through your, presumably, snotty nose

Holding breath  traps  additional  carbon   dioxide which has been produced from the physical activity involved in moving the muscles. It is quite common  for the nose to become blocked again shortly after doing this exercise. This is because  the underlying  breathing  has not been  changed and the body has not become  accustomed  to the increased carbon  dioxide  level. However,  after  some  time,  and with regular practice of breathing  exercises, the body will adapt to a higher  level of carbon  dioxide and  the nose  will remain unblocked.

Give it a try