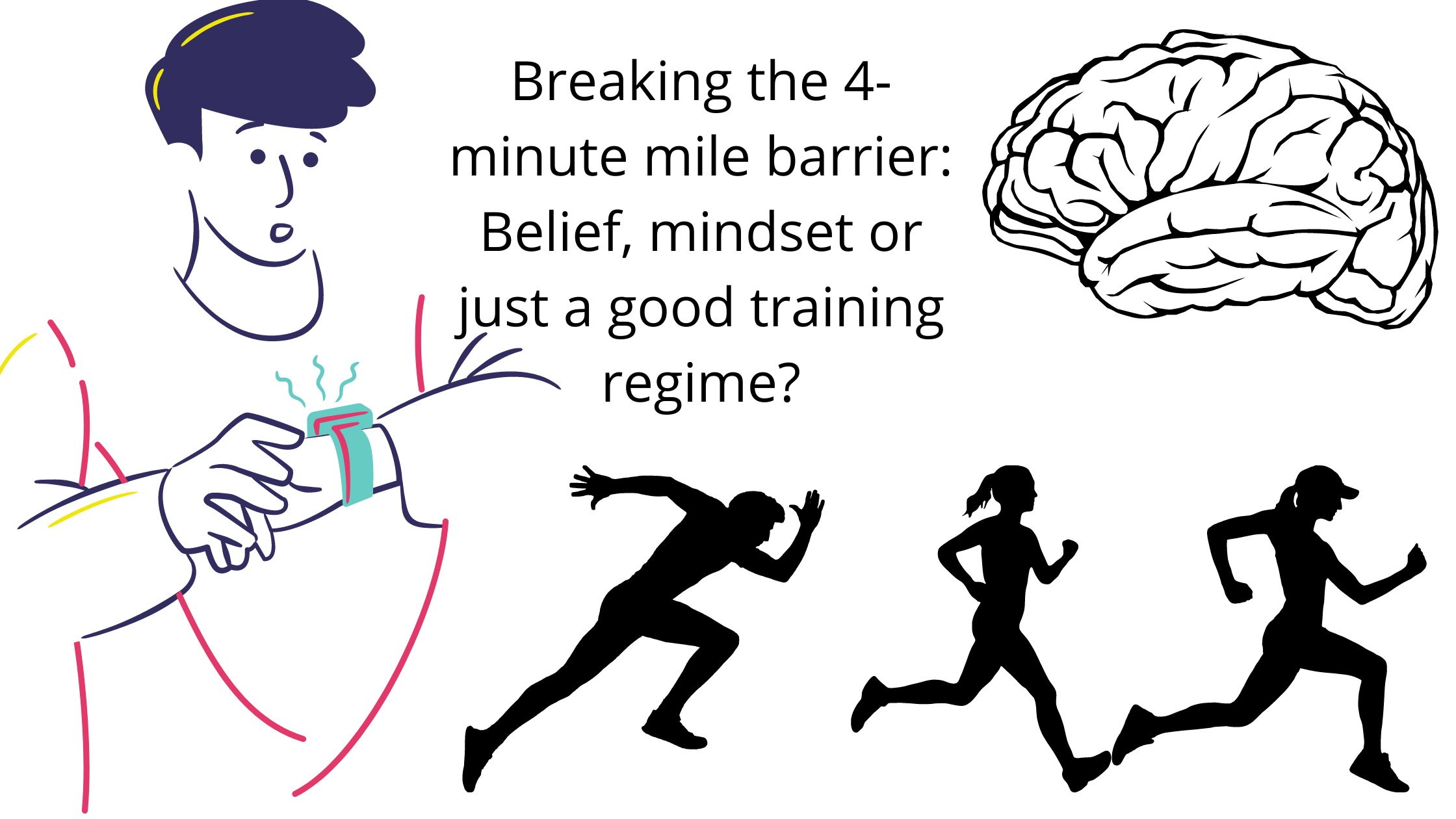 Mindset advocates wax lyrical about Roger Bannister who on May 6, 1954, broke the world record for the mile by nearly two seconds, becoming the first man to (officially) run the distance in under four minutes. The previous world record had lasted for nine years. Within 46 days, Australian Jim Landry broke Bannister’s record by a further 1.5 seconds.

It’s psychologically fascinating that psychologists obsess about this event and the alleged role belief played in the outcome.

In the preceding year, Bannister ran 4:03.6. He was subsequently quoted as saying, “This race made me realize that the four-minute mile was not out of reach.” psychologists point out that didn’t say, “think,” “feel” or even “hope.” He said “realize,” implying a shift in his belief system from perceiving an “impossible” goal to perceiving one that was attainable. This obviously meant that Landry and all who followed him had their belief systems changed too!

So, was it belief or something else? If it was belief , does it mean you too can get that job, lift that weight, get that person you fancy and all you have to do is to believe!

For those who love the idea that Bannister achieved the 4-minute mile because of the magic of positive thinking, Here are some things to think about.

Whilst they were not formally recorded Parrot, Run and Cunningham had all broken the 4-minute mile landmark at informal events. Presumably, anyone on the “circuit” would have known that!

It is true that the 4-minute barrier had stood for a while, but it’s hardly surprising as World War 2 could have slowed the athletics world down. Bombing does that!

I’d suggest that Post-war there was a revolution in the concepts and training methods being used by (some) athletes:

” A typical Bannister workout would not look out of place in any modern miler’s logbook: Sir Roger liked to run 10 quarter-mile (.4 km) intervals per workout at close to race pace, with about 2 minutes of recovery between each interval”. (source) and rest “ Frustrated by his inability to improve, Bannister took a complete 3-day respite from running. When he returned to the track after this furlough, he found that he was suddenly able to run the same 10 quarters in 59 seconds each“

Methods such as Plyometrics come on the scene in the 1950’s (source). According to Athletics weekly (here) the running contribution to his aerobic development was complemented by hiking and his strength endurance by mountain climbing. Progressive overload was achieved not by increasing the number of repetitions, nor by reducing the recovery, but rather more simply by incrementally increasing the speed of the reps

It is totally true that pushing physical barriers require mental involvement, but it’s more likely that public criticism drove his determination. History.com  reports that “In 1952, he competed at the Helsinki Olympics, coming in fourth in the 1500 meters. That performance was roundly criticized by the British press…Thanks to insights he gleaned from medical school, he created a specially tailored training regimen to prepare himself for his barrier-breaking run” (source)

Critically Bannister was a driven doctor! No doubt he researched and focused on the task

In summary, check out this article (here) The Roger Bannister Effect: The Myth of the Psychological Breakthrough:

“The point isn’t to discount Bannister’s amazing record. It was an astonishing feat. Instead, it’s to show the tidy narrative of psychological breakthrough, unleashing the potential of humans to realize they too can run under 4 minutes is a false one.As we can see in the 800, 1,500m, and 5k, the stagnation and breakthrough during that time frame were the norm. It’s much more likely that the stagnation was attributed to the war and the breakthrough was a return to sport along with the modernization of training which occurred during the 50’s and early 60’s. The sport began making its transition to modernity with modern coaches like Franz Stampfl, Lydiard, Cerutty, and others beginning their work”

From my point of view, if by mindset you mean settling down and doing the work, I’m 110% with you. If that also means intelligently reviewing your training methods and sensible experimenting, I’m there. However, if mindset implies a magical transformation where simply belief does the job, I’m very, very skeptical.