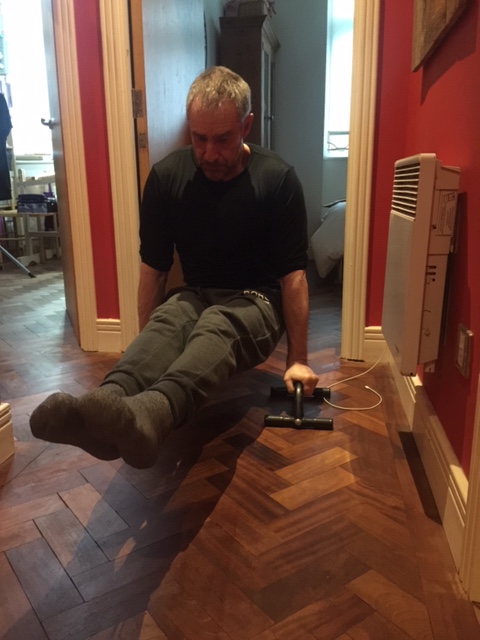 in the 60’s to 70’s  you would have been hard pressed to ignore the isometrics movement. Vic O’beck published “How to Exercise without moving a muscle” in 1964 and it became very popular.

During the late 60’s early 70’s the Daily Express ran a regular cartoon in its pages which popularised the exercise regime. The cartoons were eventually bundled into a book Isometrics. How to exercise without moving a muscle, in strip cartoons from the Daily Express

Like many fitness fades, the interest faded from main stream use, due in part to silly claims. A regime that promises to get you fit and trim in 90 seconds a day is bound to sell you the book or course, but fail to deliver much , if any, fitness.

This is a shame, as given the right objectives, the static hold has a really useful role to play. According to James Hewitt who wrote Isometrics for you: Get fit and trim in 90 seconds a day

in 1966  “without special apparatus and without moving a muscle you can grow stronger and build, or reshape your body to nearer your hearts’ desire. The static  contraction has been part of physical culture systems  for a very long time. Hatha yoga contains postures  held without movement”.

Put simply, isometrics are a system of physical exercises in which muscles are caused to act against each other or against a fixed object. It’s a form of exercise involving the static contraction of a muscle without any visible movement in the angle of the joint.

The popular regimes focused on basic body building type exercises and suggested a 6  second static contraction  with a maximum, or comfortable maximum contraction. This bicep curl picture gives you a good idea.

Whilst this had some value, the use of the extended static hold in functional fitness is probably in developing the capacity to simply hold postures which contribute to actual exercises. The reality is that if you want to kick up to a rock solid free standing handstand, or do 20 plus pull ups, you better be able to hold a static ( albeit “leaning” ) handstand against the wall, and hang for 60, 90, 120, 180 seconds. Extra grip strength is always useful!

Btw you could find yourself struggling at 10 seconds when you start. Just do what you can and build up

So think about your regime and hunt out obvious postures to practice: the side planks, lunging pushes against a wall and deadlift holds spring to mind. Adding the L sit, a horse stance ( the old martial arts favourite) and a “hip up” hold can , when combined,  make a really useful home exercise regime.