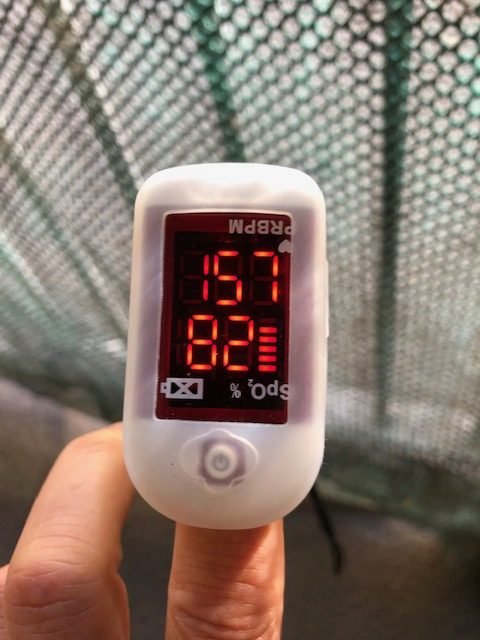 Lon Kilgore wrote in ‘The Paradox of the Aerobic Fitness Prescription” (Crossfit journal) that improvements in oxygen management could be driven by dropping Oxygen saturation during/after exercise. The logic of the General Adaption Syndrome (Seyle) requires an alarm phase to provoke adaptations.

“In the intermediate trainee and beyond, it is the depression of oxygen saturation as a result of interval training that forces the muscle to adapt to improve its ability to extract and consume oxygen to power exercise. Oxygen saturation is a marker of the specific driving force of VO2max gain*. If a beginner does long-slow-distance work and blood oxygen saturations drop 1% or less to 97%, this is enough to drive adaptation. But intermediate, advanced, and elite trainees need more. They need a drop in oxygen saturation to as low as 91%, maybe even lower for an elite athlete”

This observation was supported by David Lin et al who wrote “Oxygen saturations and heart rate during exercise performance” There is a fascinating write up here This basically showed that at a certain level of work, you can see a  drop in O2 saturations

“SpO2% desaturations during maximal performance levels with power bursts into the clusters as revealed in this test could lead to measures of intense interval training providing an important augmentation to sports conditioning. “

This mornings workout was a 15 minute AMRAP of 20 kettlebell swings, 15 double unders 150m sprint . I decided today, I’d take my pulse oximeter down. About half way through, straight after my double unders and during the run I managed to get my pulse ox on and this reading came up.

After a quick  recovery our workouts always end with a disgusting stair climb to our flat ( to get home and haul the kettlebells back up) At the top it always feels as if you are going to die. As I reached the top I managed to get my pulse ox back on and whilst my heart rate was 160, my O2 saturations were 97. It took me a while to get my phone out so I only got a photo after my heart rate had dropped to 152

My take home conclusion  is that the variation in a Crossfit workout combined with power (in his case jumping in the double unders) really stresses the oxygen system. The requirement to rapidly change from one exercise to another  takes the body by surprise and has it scrabbling around for oxygen like a pandemic government trying to buy PPE. BY comparison the rhythmic stair climb. which felt disgusting, and produced a highish heart rate, didn’t disturb my normal reading of 97%.

Obviously this is an old Pulse oxmimeter, this wasn’t a clinical environment ( no lab rats, no one had a clip board), but it was an in treating bit of citizen science!)