Exercise and diet for Endometriosis 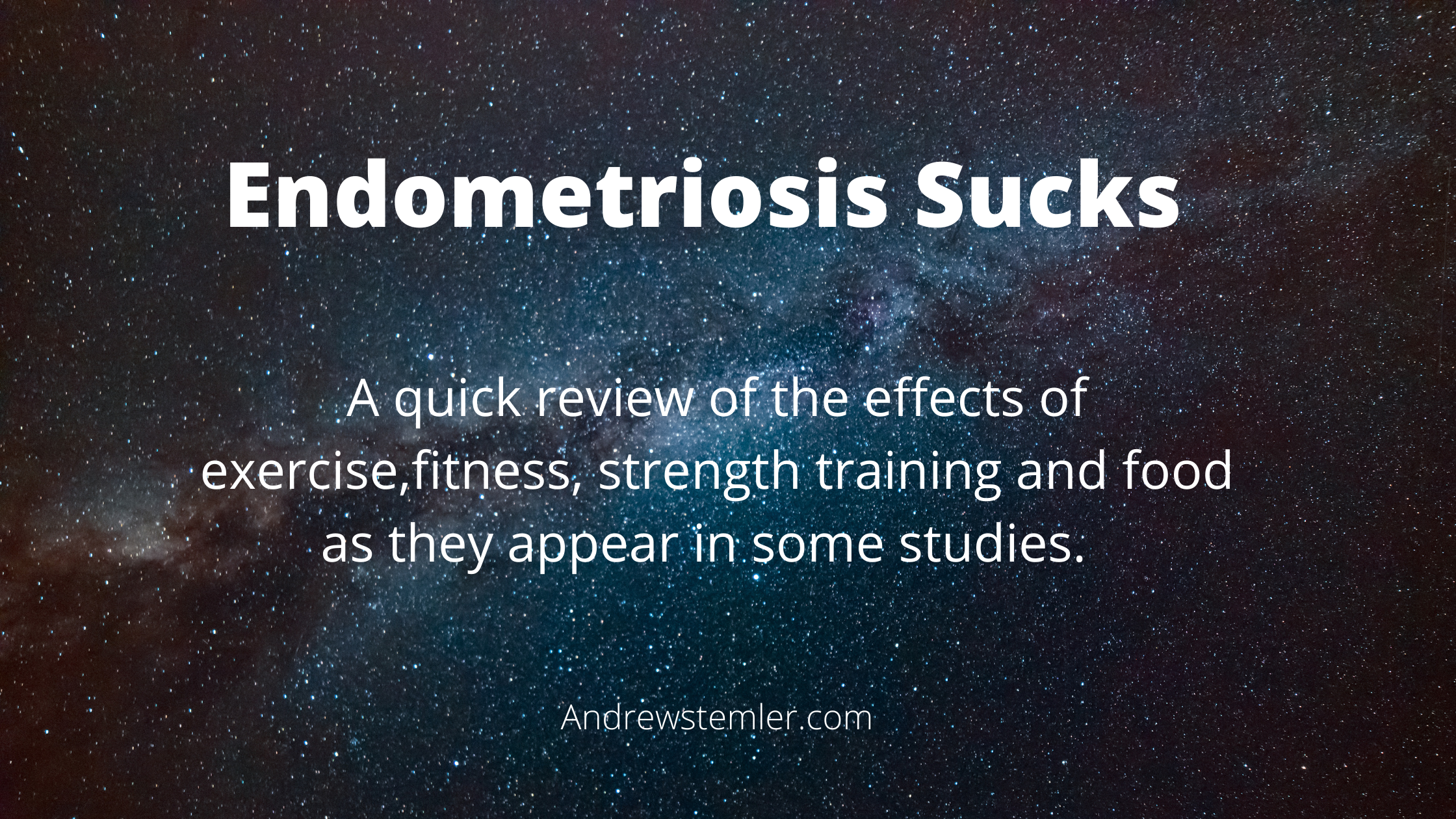 The claim by some fitness experts that physical training can deal with endometriosis was fascinating news to me. I keep an interested (not obsessive) eye on the literature and I clearly recalled the last proper review was by Camila M Bonocher et al in

It concluded that the studies available are inconclusive regarding the benefits of physical exercise as a risk factor for the disease and no data exist about the potential impact of exercise on the course of the endometriosis. You can access the study here if you don’t believe me.

I should say though, its pretty much a given that being fit helps you fight off illness. The more unfit you are the more vulnerable you are to bad stuff.

Its as well at this stage to remind ourselves that symptoms of Endometriosis result from a local inflammatory peritoneal reaction caused by the ectopic endometrial implants, well, according to Lebovic et al it is (Immunobiology of endometriosis. Fertil Steril. 2001;75:1–9.).

The obvious connection is this: If endometriosis results from inflammation, and as regular physical exercise seems to have protective effects against diseases that involve inflammatory processes anyone with an inflammatory condition should exercise.

However, Febbraio ( Exercise and inflammation. J Appl Physiol. 2007;103:376–377.) looked at all the reports and concluded that there are no controlled and randomized studies identifying whether physical exercise prevents the occurrence or progression of the endometriosis and how and to what extent physical exercise could be beneficial for women with endometriosis.

It’s not the discovery of the century or a great surprise to spot an inverse relationship between the practice of physical exercise and the risk of endometriosis. If you are in pain, it’s hard to exercise.

However, the new kid on the block is the 2019 study

“Strength Exercise Has Different Effects on Pressure Pain Thresholds in Women with Endometriosis-Related Symptoms and Healthy Controls: A Quasi-experimental Study”

The strength exercise regimen used in this study increased pain thresholds in healthy women but not in women with endometriosis-related painful symptoms. The maintenance or even worsening of pain perception after exercise in women with persistent pain, such as those with endometriosis, may limit their adherence to a physical training program, which in turn could prevent them from experiencing the long-term beneficial effects of exercise.

You can imagine the days when you get up and would rather throw up in your mouth than do anything. The days where a motivating exercise class can go screw itself. So it’s worthwhile seeing what works for you to reduce pain. Stroking a cat could be a great distractor, a heavy set of deadlifts could work for some!

From my own perspective, the tougher you are the more you should be able to “put up with stuff”. You can imagine someone kept in cotton wool all their lives would feel more pain in response to a punch in the arm than someone who has boxed for a few years, although the recent strength report speaks against this!

But, rather than leave you feeling hopeless, check out

It was observed that Self-management strategies, consisting of self-care or lifestyle choices, were very common (76%) amongst women with endometriosis. The most common forms used were heat (70%), rest (68%), and meditation or breathing exercises (47%)( I have all of the breathing exercises here) Cannabis, heat, hemp/CBD oil, and dietary changes were the most highly rated in terms of self-reported effectiveness in pain reduction. Physical interventions such as yoga/Pilates, stretching, and exercise were rated as being less effective. Adverse events were common, especially with using alcohol (53.8%) and exercise (34.2%).

Getting some hip stretching in, sounds like an ok, free to do at home, treatment. Here are some stretches

Its interesting to note that in the early part of a stretching regime, your range of motion goes up, not because you are more flexible, but you can tolerate more discomfort.

Pretty much anyone who is “in” physical therapy obsesses about flexibility. It does however make sense to have flexible and mobile hips. Here are some of the standard hip area stretches

Adding regular mobility to your regime is a good idea. You’ll find pretty much every drill in my back pain course (only £9.97)

Understanding how pain works sometimes helps. I have a free online course here.

Core exercises need a bit of consideration. Some argue being chronically over tight in your “core and floor” can bring on pain, others say, being too loose “down there” can promote incontinence and back pain. This is very much a test it out and see what effect it has on you. I’d suggest some sensible experimentation with both pelvic mobility and pelvic strength. Ultimately you really do need to self monitor. Ive got most of the core exercises in my back course

Just when you were in pain and looking forward to a nice bun or a bar of chocolate to cheer yourself up, we need to discuss the food you eat.

Eating to reduce inflammation sounds like a good idea. In particular you want you avoid the “bad food” that promote inflammation. You can normally identify these by the fact you want to stuff them in your gob! Crisps, biscuits, refined stuff, delicious artificially created stuff: ALL BAD!

Annoyingly a gluten free diet has produced a reduction in pain so it’s delicious crusty bread Versus pain. Your choice

If you have a decent palate you’ll like some of the good stuff like ginger, turmeric, garlic and olive oil.

You’ll debate red meat as its good for iron building (lost during heavy periods), but probably full of artificial hormones that will unbalance your hormone profile.

Obviously all the healthy stuff you probably avoid, you should eat.

Try not to get too drunk, try to moderate illegal drugs, although I have a friend who swears about marijuana.