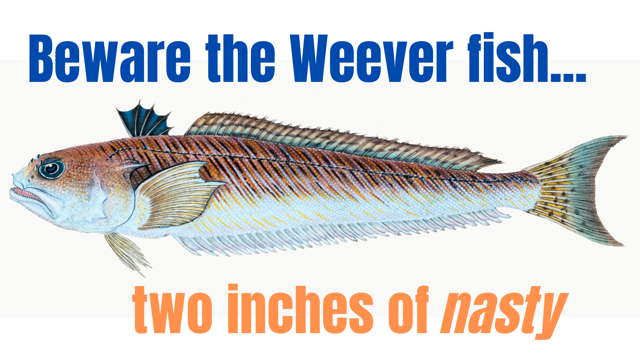 The weever fish  is 2 inches worth of nastiness that hides in the sand on British beaches. Normally, who would care, but with most of Britain probably preparing to descend on the British coast for their holidays, its worth while being careful.

Weever fish, on their backs  have a series of toxic spines which, when stepped on, can leave you in absolute agony.

In fact, their neurotoxic venom is so potent that they can really hurt you, even if you have already bludgeoned the fish to death, and killed its entire family. If you were to step on its dead spines it still causes excruciating pain. It’s like a marine Walking Dead, but a more aquatic plot line.

Allegedly they hide in the sand and you “accidentally” step on them.  Its a more natural version of  the car in front intentionally hard breaking  to make you drive into them and claim on your insurance

It’s important to initially find a source of hot water – as hot as the victim can bear, but comfortable enough to stick your feet into.

Stick their foot in the hot water.

This reduces the effectiveness of the venom by breaking down it’s protein, and it helps to reduce spasms.

Annoyingly though, there’s no anti-toxin for the sting. It’s recommended to keep the small wound open and let it bleed out the venom. The blood loss won’t be high and this will help to clear your body of some of the toxins.

Also ensure that there aren’t any of the fish’s spines still in the wound. Removing them with tweezers immediately is very important.

•Encourage the casualty to sit or lie down

•Immerse the affected area in hot water (40°C – 41°C) for 10 minutes to relieve pain and swelling. Alternatively wash the area with copious quantities of cold water

•Monitor vital signs and watch for signs of an allergic reaction, such as wheezing and itchy skin

•I know this article is about the weever fish, but If the sting is from a jelly fish, pour copious amounts of vinegar or sea water over the area of injury to incapacitate the stinging cells. Help the casualty to sit down and call 999/112 for emergency help.